Analysis: China’s New Air Routes Near Taiwan: Why Now? To What End?

Beijing has reneged on an agreement reached with Taipei in 2015, in part to destabilize the Tsai Ing-wen administration and to show who is boss in the region. Given the air safety risks caused by such unilateral moves, the international community cannot afford to remain silent.

The unilateral activation by China earlier this month of four air routes close to the median line in the Taiwan Strait has sparked protests by Taipei and led analysts to conclude that Beijing is ramping up the pressure on the Tsai Ing-wen administration following the conclusion of the 19th CCP Party Congress.

Four routes — a northbound path for the M503 line and three east-west extension routes (W121, W122 and W123) — were launched without prior consultation by the Civil Aviation Administration of China (CAAC). At its nearest point, M503 is 7.8 km from the median line on the Taiwan Strait and close to the Taipei Flight Information Region (FIR). It is also close to a training area for the Taiwanese Air Force. W122 and W123 are close to the offshore islands of Matsu and Kinmen. 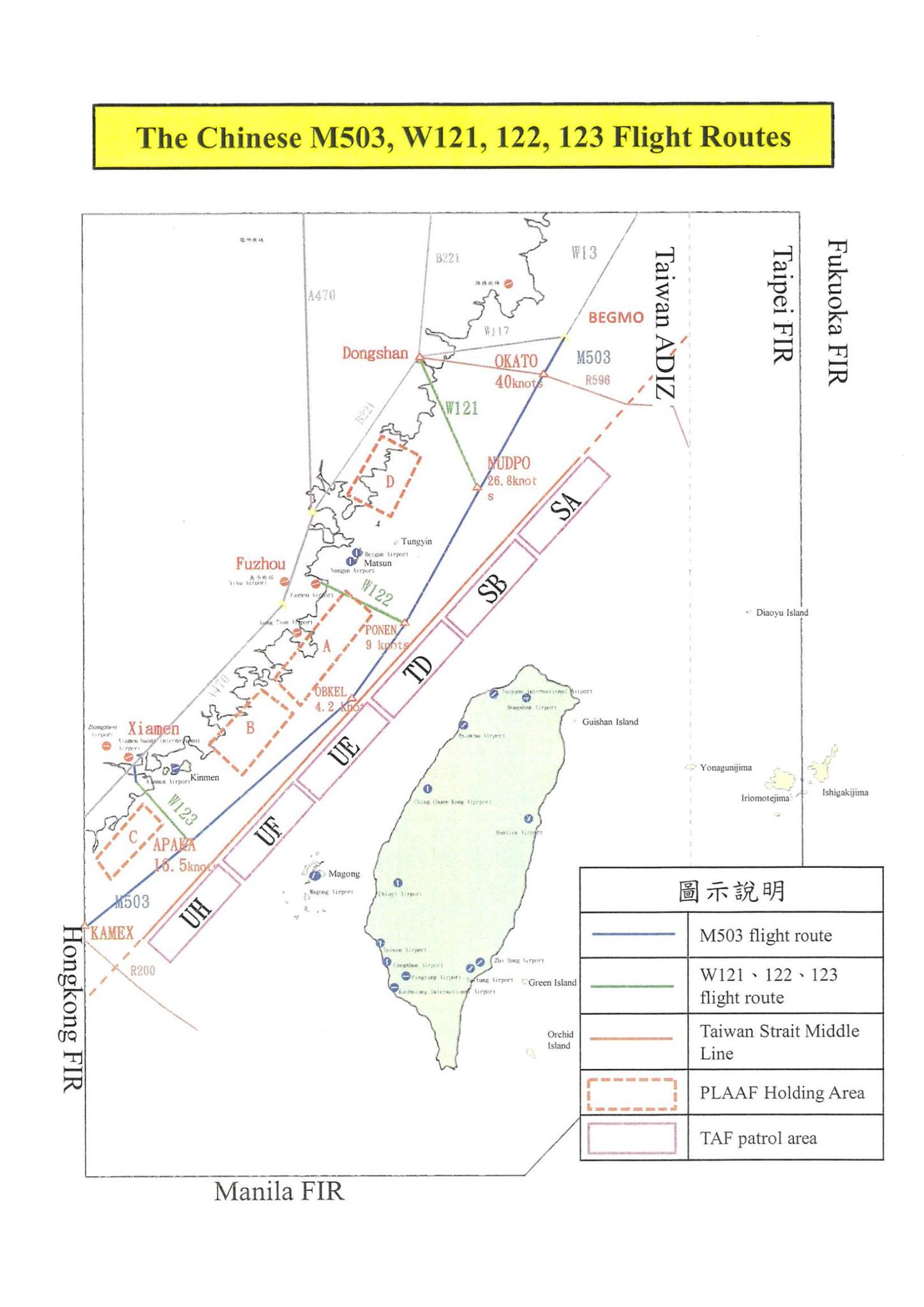 A senior adviser at the U.S. State Department on Monday told Taiwan’s Central News Agency that Washington opposes the type of unilateral action taken by Beijing in this issue.

Taipei, which has protested the move, maintains that the move violates an agreement between China and Taiwan reached in 2015 — when the Kuomintang (KMT) administration of Ma Ying-jeou was in power — which opened M503 to southbound commercial traffic.

One noteworthy aspect of the 2015 agreement is that it also came in the wake of protests by Taipei over Beijing’s unilateral declaration of the new air route on Jan. 12, with flights set to begin on March 5 that year. Following consultations between the two sides, the distance of the M503 route from Taiwan’s FIR was increased from 4.2 nautical miles (7.78 km), as initially planned by China, to 10.2 nautical miles (18.9 km). Following consultations, the first flights on M503 were launched on March 30 that year.

The route activated earlier this month therefore reneges on the conditions agreed upon between the two sides in 2015 by bringing the nearest point back to the initial 4.2 nautical miles. During the same consultations on March 2, 2015, Beijing also agreed that M503 would constitute an international civil aviation route and would not be used by Chinese military aircraft. Whether Beijing will also violate this agreement remains to be seen. 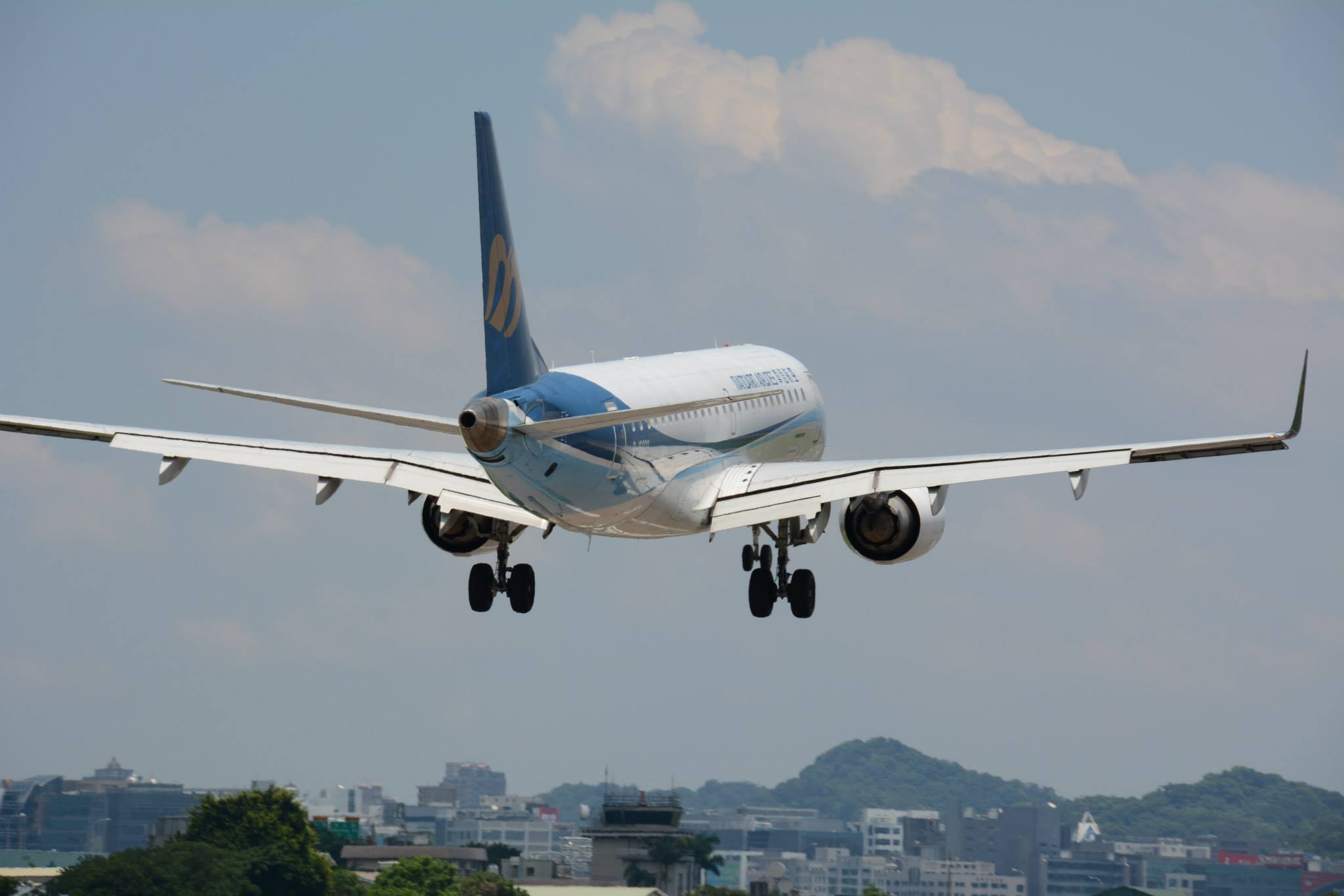 Beijing’s move arguably constitutes its latest attempt to embarrass the Tsai administration by demonstrating its willingness and ability to act unilaterally. In other words, this is meant to undercut Taiwan’s sovereignty and to signal that previous agreements between the two sides were never negotiated between equals. Compelled by necessity to respond cautiously lest overreaction further fuel instability in the Taiwan Strait, the move has nevertheless come as a blow to President Tsai, who has faced domestic criticism within the green camp for not being firm enough in her defiance of Beijing. A harsh response by Taiwan, such as increased military action, would not only increase the risks of accidents, which could quickly spiral out of control, but would furthermore give even more reason for radicals in the CCP and the PLA to further tighten the noose around Taiwan.

This has also given the opposition KMT further ammunition to accuse her government of being unable to defend the nation’s sovereignty, which has already been challenged by the growing presence of the People’s Liberation Army (PLA) in surrounding areas. In all, Beijing’s move was a low-cost, risk-free (for President Xi) means to further undermine support for the Tsai administration, whose popularity has been dragged down in recent months by a handful of domestic policy issues. With important “mid-term” elections coming in November, Beijing has every incentive to act on its already-stated goal of ensuring that the Tsai administration remains in office for a single four-year term.

In a larger context, Beijing’s move may also be in response to the intensifying presence of the U.S. military along the Korean Peninsula and as part of its ongoing efforts to displace the U.S. as a regional player. According to an official at Taiwan’s National Security Council, China had intended to establish new flight routes near the Taiwan Strait as far back as 2007, but abandoned the move after strong pressure from Washington. This defiance of U.S.-set rules could help explain Washington’s strong response, not to mention the willingness of the American Institute in Taiwan’s (AIT) spokeswoman to make a rare, albeit careful, appearance on a popular Taiwanese TV talk show last Friday.

What can be done?

The introduction of new air routes without proper consultations by the principal parties increases the risks of miscommunication and accidents, thus imperilling commercial aviation.

Taiwan’s CAA has called for talks with its counterpart in China, but so far the odds of a positive response seem to be relatively low. As with other issues involving Taiwan and its role within the international community, pressure from the global community will be a determinant factor in how Beijing responds to the concerns raised by Taipei. With a total of 58 million passengers passing through Taiwan’s FIR every year, there is every incentive for the international community to try to minimize the risks of air accidents — after all, mid-air collisions do not care one bit for the political dispute in the Taiwan Strait, or for Beijing’s attempt to make a point due to the unwillingness of the Taiwanese to be cowed by its authoritarian neighbor.

Pressure on Beijing will have to come from countries themselves, however, as the agency charged with civilian aviation, the International Civil Aviation Organization (ICAO), is unlikely to intervene: It is currently headed by Fang Liu, a Chinese citizen who secured a three-year appointment as secretary general of the Montreal-based organization in March 2015. Between 1987 and 2007, Fang was an employee of China’s CACC (then known as the General Administration of Civil Aviation of China), the same organization that announced the unilateral move on the flight paths in the Taiwan Strait. Since beginning her functions at ICAO on Aug. 1, 2015, Liu has ostensibly played a key role in preventing Taiwan from participating at ICAO meetings.

268
Cross-Strait Featured Taiwan Politics
President Tsai’s Second Term and Cross-Strait Relations: What to Watch Out For

1.2K
Taiwan Politics
Above All, The Legitimacy of Taiwan’s Democracy